Something Does Not Compute

In the past few days I have been gearing up for the Tiamat release, specifically the Svipul.  My main will be training to fly the ship and commit space violence on others, but the focus of my analysis has been on the industrial side of things with building the Svipul for sale.

I have a few Confessor BPCs that were reverse engineered, and I took a look at the inputs which were necessary to manufacture those.  I also plugged the blueprint into ISK Per Hour (IPH) and was shocked.  IPH showed a build cost of 25 million and change ISK for a build.  As of this morning, Jita 4/4 has Sell Orders at 52 million per hull.  This is a 100% markup on each single hull.  Something could not possibly be right here.

So, I logged in the Jita trade alt and took a look at the inputs. 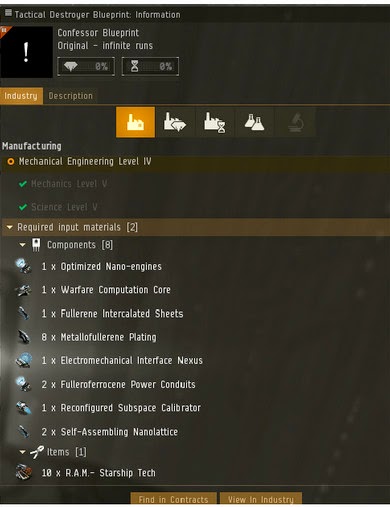 Outside of the R.A.M all of the components came out to a cost of 25,800,000 to procure.  There clearly must be some other factors going on that would lead to a 100% markup and the most shocking part is the sustained levels at those Sell Orders.

When the Confessor originally was released, the first few hulls were over 100 million.  It took about 2 weeks, and then the prices started to come down to 70 million.  But, this ship was released with Rhea in early December.  To be nearly 2 months later and have the Sell Orders still at 50+ million is astonishing.

Yes, you need to reverse engineer the BPC and there are limited ways of doing that, but a POS with the Array for Reverse Engineering does not require that type of markup on the end product.  Yes, the supply of relics is not overwhelming and that could be leading to a markup, but again it is not logical that it is worth 25 million ISK per hull.  Especially when you generally get multiple runs on a BPC when you reverse engineer.

One of the benefits of being an exploration/wormhole corporation is the ability for members to sell their loot to the corporation.  That is where we initially received the first batch of Small Hull Relics.  I am thinking now that we will come up with a new reimbursement system for those which will generate increased interest in corp members going out and finding those relics, but also be a benefit for the corporation on the ISK side of things.

I am very glad that one of the builder alts has Minmatar Starship Engineering V in training now.  Clearly there is a huge opportunity to make some serious coin on these builds.

The other huge benefit is that I can produce both Confessor's and Svipul's in mass quantity at relatively low cost and re-sell to corporation and alliance members for far less than they could purchase on market.