AAR - Do YOU Know the Ship YOU are Flying

So, the war with The Bastards kicked off yesterday.  Members of A Band Apart had been preparing themselves for this war by getting pilots into system, and beginning to stock corporate offices with ships, modules and other necessary provisions.

This post will not focus on the total activities of the day.  Ithica has a very good write up of the action here.  It is from The Bastards point of view, but decent in respect to what occurred.  Take a look at the write up.

The focus of this post is a reflection on one aspect of the action yesterday from the ABA point of view; Engagement Envelope.

You see, certain ships fill certain roles within a fleet.  A tackle frigate will be diving into the hostile fleet and looking to obtain point/scram on the primary target and also web them if they are fit for webs.  Logistics, you are the space priests.  You should be hanging behind the main fleet and in range to apply remote repairs.  DPS - the heavy hitters.  You are following commands of the FC in relation to whether you are aligning or anchored on the FC.  Finally, there are the e-war aspect.  Brave are famous for fielding entire wings or e-war frigates.  CFC created an entire doctrine based on the Celestis.  Our post on the engagement envelope will be focusing on the e-war side of a fleet.

The example we will be using here is a Griffin.  When you have been given a command to warp to X, you are not warping to zero.  Oh dear.  You warped to zero.  Get ready to warp your pod out and re-ship.  You should ALWAYS be warping to range.  It is totally within your role to warp to 70 of the FC's command.  Pictures are always better, so lets get to those. 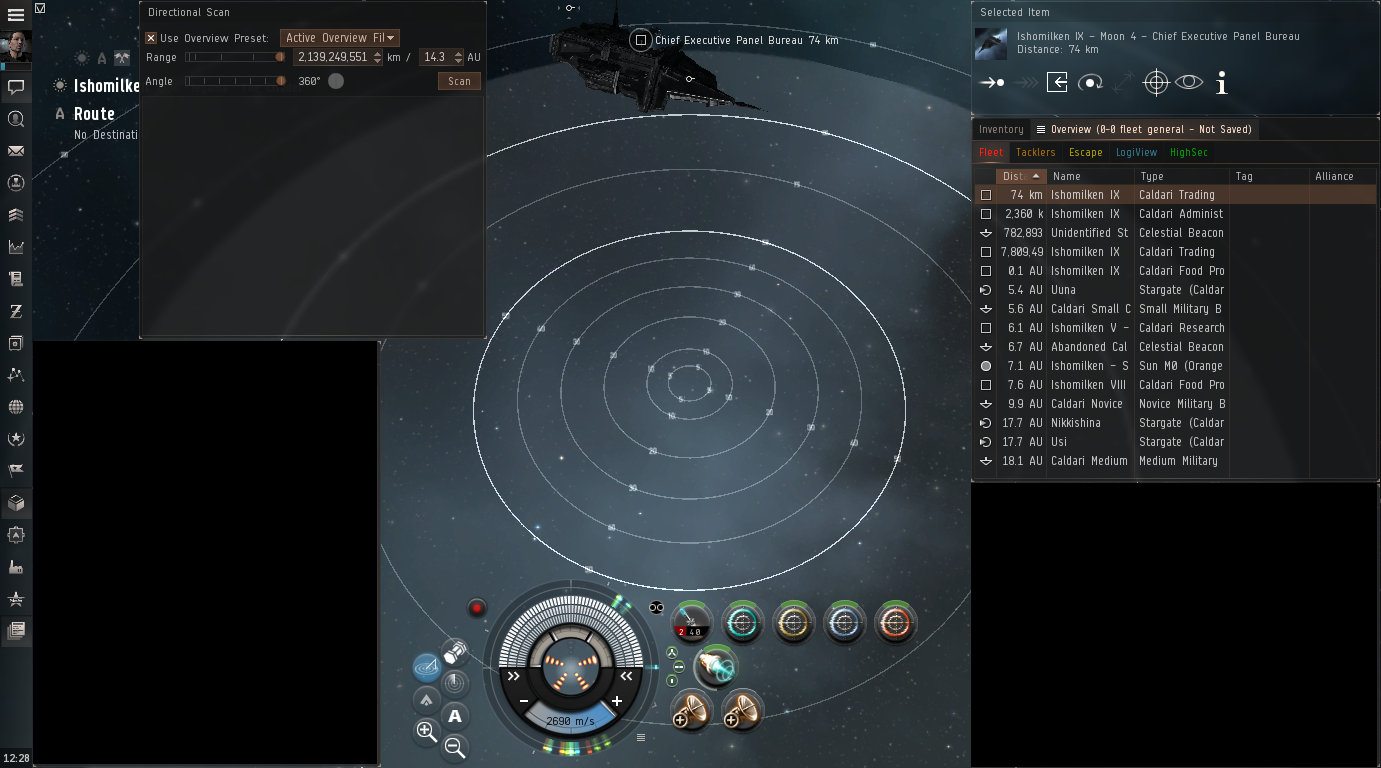 We warped to this station at 100km, as there might be hostiles undocked, and without intel on their positions we do not want to warp into their position.  Landing 70+ km off the station gives us some maneuverability room to play with.  So, we start to align off of the station in a straight line relatively in a North-Northeast direction.

Ok, now in the Griffin, we technically have 2 different offensive platforms.  We have a couple rocket launchers as well as a rainbow rack (one of each flavor) of jammers.  Those rocket launchers, offline them.  Seriously.  We do not want you to be tempted to dive into their range.  You should NEVER, EVER, EVER be in range of a ship to use those rockets.  They are there to fend off drones or if by chance a tackle frigate gets into range of you.

Your purpose is those jammers, so lets look at the next picture. 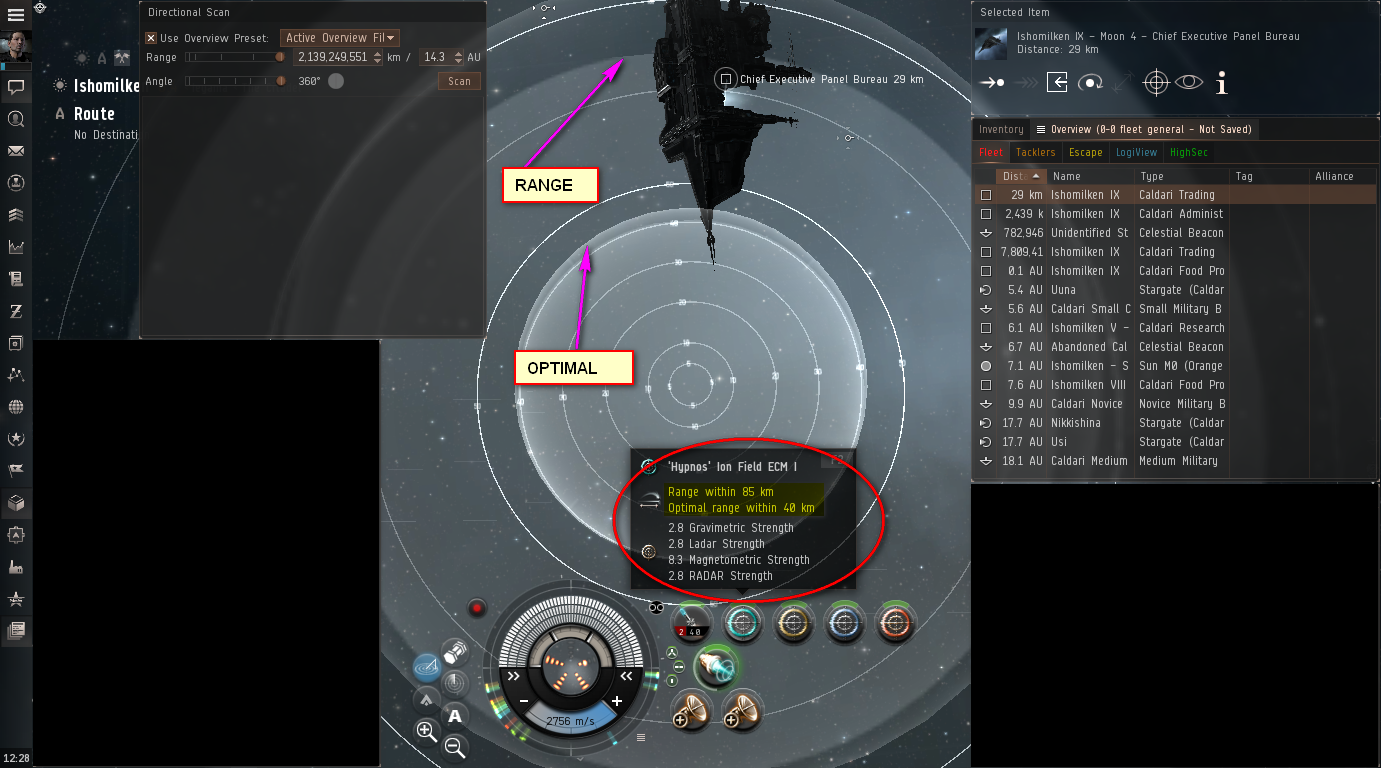 Highlighted in yellow are those ranges in kilometers.  The zone between those arrows is what we are looking for. 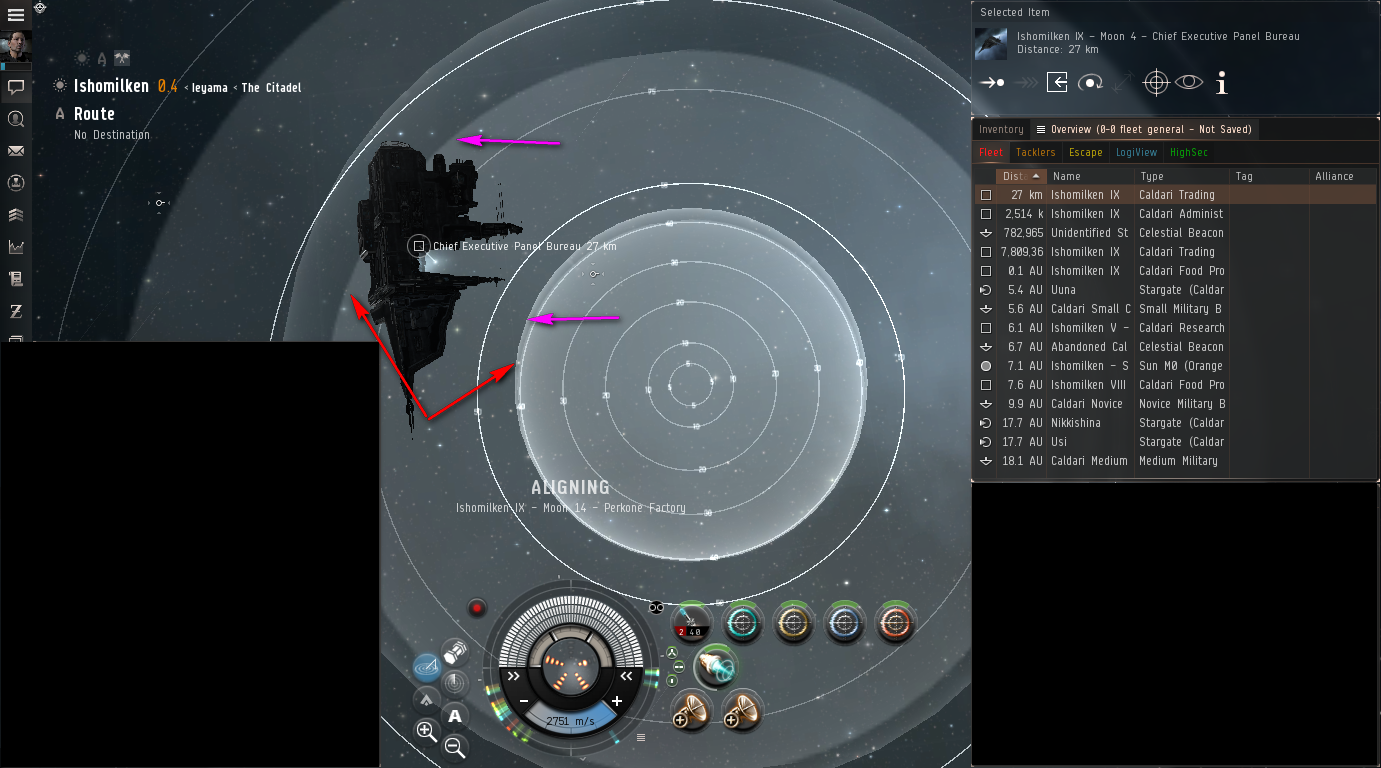 As we have been aligning in that line that I mentioned, we have now started to get into the sweet spot.  That engagement envelope.  You will know that you have arrived there  as  the station undock is now in that window between total range and optimal range.  Technically we could move closer to get the optimal bubble closer to the undock, but by doing so we put our ship at risk.  The FC would rather have a live griffin than a dead one.  So, lets keep things in this envelope.

You want to keep maneuvering your ship to keep the hostile fleet in that window.  Getting yellow boxed, align our and warp out.  You are outside of point range unless it is a proteus or lachesis.  But, the MWD allows you to burn out of point range fairly easily.